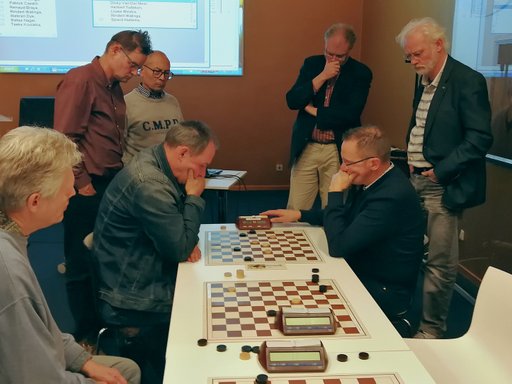 FRYSK! Qualification tournament for the WC FRYSK! on 3 March 2019 in Franeker.

FRYSK! is an endgame tournament, Frisian Draughts with 5 men each.

To play and practise this game, look at www.frysk.info for a free app and info.

At the same time in Tresoar there will be played the second game of the match of the worldtitle international draughts between Alexander Shvartsman and Roel Boomstra. More info on www.wereldtiteldammen.nl.

There was a special combination of mind sports on Saturday 29 December in Tresoar in the Frisian capital of Ljouwert/Leeuwarden. In one of Tresoar’s rooms, one of the games in the match of the world championships international draughts was played between Roel Boomstra and Alexander Shvartsman. The game ended in a draw.

The public in Tresoar could follow the game either by means of an electronic connection or in a live analysis. However, it was also possible to move along a number of rooms in Tresoar and to follow or even to join the Dutch Championships Frisiam Draughts with five pieces per player (FRYSK!). 20 players joined this tournament, both Frisian playing and international playing mind sports from the Netherlands and abroad. In between the various rounds, these players of course often took a look at the international macht game in the other room in Tresoar. A nice combination that worked well for either public!

The Frisian Draughts tournaments had 6 rounds, during which the players remained excepionally close to each other (despite the low numer of draws – the second round even did not see any draws at all!). After four rounds each player had lost at least half a point (and in most cases more). After five rounds there did not seem to be any reasonable doubt that either Marten Walinga (Waaksens) or Jelle Wiersma (Wommels), two of the very best Frisian Draughts players, would gain the title. However, in the sixth round, to the surprise of all and sundry, dark horse Siebren Dyk from Jorwert reached the same amount of points as Walinga and Wiesma. Thus, play offs were necessary in Tresoar. In these, Dyk could not stand up against his opponents. Walinga and Wiersma both got 1,5 points, and thus two more play offs were necessary, until Jelle Wiersma mastered the title. The thrilled public rewarded the three players with a thundering applause.

The Frisian Historical and Literary Centre Tresoar has been appointed as National Dutch Collection Centre for Mind Sports.