The surprise winner of the tournament was Alessio Mecca from Doganella di Ninfa. Mecca gained an advantage in the first round and never let it go, despite Sergio Scarpetta from Cerignola and Michele Borghetti, world champion in checkers and favourite to win the tournament, not making things easy for him.

Alessio Mecca is the first player to qualify for the FRYSK! world championships, i.e. Frisian draughts where each player has 5 pieces. The world championships will take place in Franeker / Frjentsjer on 5 March 2017. We may already be welcoming some Italian players before that, as in a few weeks’ time some Italian schools will start courses in Frisian draughts. The aim of these courses is for an Italian team to take part in the championships for schoolchildren, to be played in Ljouwert / Leeuwarden later this year. Moreover, the courses will also prepare for the Frisian draughts event in 2018, when Ljouwert will be Cultural Capital of Europe.

The English language material for the course will be translated into Italian by Sergio Scarpetta. Vice-president of the Italian Draughts Federation Claudio Ciampi, who attended the award ceremony in Livorno, supports these developments wholeheartedly. Italian grand master Paolo Faleo will be one of the teachers of the course.

Picture: Mecca with white winning against Borghetti. Mecca has a king and two men against Borghetti’s single king. Borghetti cannot prevent white from making a second king. Two kings against one always win in Frisian draughts when played correctly, which is one of the advantages of this variant of draughts. 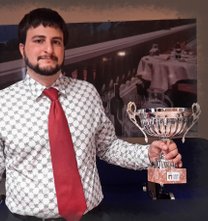 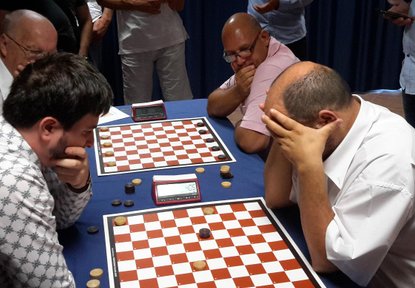