During the Grutmastertoernoai in Franeker in 2014, Alexander Georgiev and Jean Marc Ndjofang were among those who enjoyed this game, and this year we will be joined by Valneris and Svartsman as well. Ex-world champion Gantvarg has referred to Frisian Draughts as the ‘chess of draughts’ !

So what is all this? Haven’t we got a draughts game already? Of course we have – international draughts played on a 100-square board has been around for over 250 years. But the game currently known as Frisian Draughts is much older and was involved in the birth of the international game. In those days it was called Molkwerums draughts, after the sailors’ village of Molkwerum near Hindeloopen.

When Frisian or Molkwerums draughts was discovered in Paris in the eighteenth century, people were immediately enthusiastic. Until 1720, draughts was played on a chess board, but a larger board in combination with the straight capture opened up a myriad of extra possibilities. It wasn’t long before all of Paris was playing draughts the Frisian way, or, as they put it, the Babylonian way. However, for many the transition was too great, and they began to experiment with the old rules (only diagonal captures) on the larger board. This gave rise to a new variant – the Polish, Dutch or international game.

Many new possibilities were discovered and new literature arose around this game. Clubs popped up like mushrooms, and it wasn’t long before the new version arrived in the Netherlands. It was promoted everywhere, and slowly but surely the Molkwerums draughts game began to be superseded in the Netherlands. In all of the Netherlands? No, in Friesland the original version of the game continued to be played, with both diagonal and straight captures.

Generations of draughts players passed and the developments continued. The new international draughts game was analysed and made more complex. However, they also discovered that something wasn’t quite right, particularly during the endgame – a king on a large board that can only capture diagonally is actually too weak. You need at least four kings to beat one. Max Euwe expressed this perfectly when he compared the ‘Hollandse’ king with a pawn promoted to bishop or knight...

In Friesland, draughts players were unaware of this problem – in a game with diagonal and straight captures the king can be compared with the queen in chess, and an advantage of a single man that can be promoted is enough to secure victory. In other words, what is now known as Frisian Draughts is actually the original game that ‘belongs’ on the large board, balanced in such a way that the minimum of advantage is rewarded not with a draw but with victory.

In the early 20th century, the world champion at the time, Herman Hoogland, discovered Frisian Draughts and designed a new variant – Hoogland checkers, a combination of Frisian and international rules played on a small board. However, despite a brief blossoming this variant did not prosper.

Nevertheless, what Hoogland had realised was that Frisian Draughts offered a way out of the too-wide margin for draws in the international game.

This is why we are again delighted to invite Dutch and international draughts players to come and try Frisian Draughts. 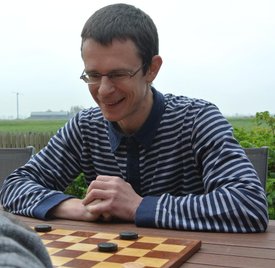 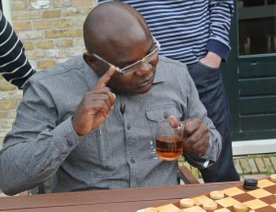 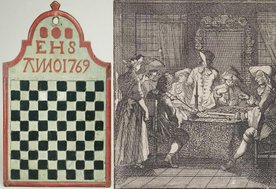 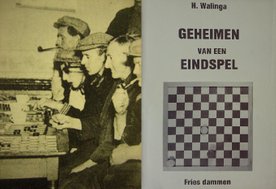 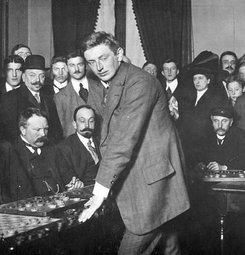 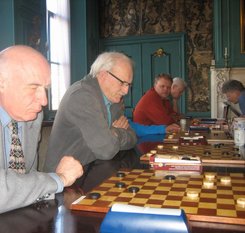 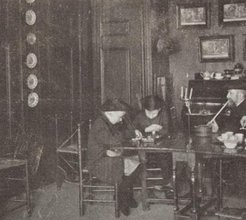