WFD organises today, together with www.lidraughts.org the next free tournament FRYSK!

Results of Fryslân Open 2019 and the fourth world championships FRYSK!

After two rounds, Jelle Wiersma in leading position at the Frisian Championships 2019

The pairing for the first round of the Worldchampionships has been executed.

The Board of the Foundation WFD (World Championship Frisian Draughts) has decided that the first World Championship will go ahead, as planned, and will be held in the City Hall of the Dutch town of Leeuwarden (3rd through 10th of August 2018)

Baljakin and Groenveld the new Dutch Champions in International Draughts and Frisian Draughts.

Davide Zhou wins the Italian Championships Frisian Draughts and qualifies for the WC.

A Frisian youth team played today at Valle D'Aosta (Italy) two mathes against an Italian youth team. Both teams won in their own variant of draughts: FRYSK! a close finish for the Frisian team and Italian draughts, an almost total victory for the Italian team. Results and photo's.

Tournaments of Frisian draughts are accepted on the international draughts calender

Dr. Liuwe Westra: The Role of Frisian Draughts in the International Development of Draughts

Interview with Vasyl Ivanchuk on chess24.com: One his the favorite tournaments is FRYSLÂN OPEN

Worldchampionships Frisian Draughts will be held at the Town hall of Leeuwarden, Cultural Capital of Europe, on 3 - 10 August 20188

Jelle Wiersma wins the second championship FRYSK! of the Netherlands

Launch of the online function of the Apps Frisian draughts and RYSK!  also a match between WC FRYSK! Jelle Wiersma and WC Checkers Michele Borghetti.

The Fryslân Open 2016 will have a live HD videostream of the tournament on the website during the different tournaments. The videostream will be tested on 20 March at www.frysk.info, when the finals of the Frisian Championships will be streamed.

Burgomaster Eduard van Zuijlen’s presence at the award ceremony has just been confirmed by the Municipality of Franekeradeel. Because the Municipality is merging with two others in January 2018, his position is a temporary one and he does not live in or even near the town of Franeker. Despite this, he will attend the award ceremony on Sunday 20 March in person. See https://nl.wikipedia.org/wiki/Eduard_van_Zuijlen. 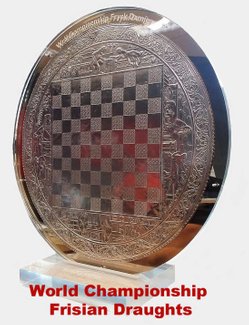